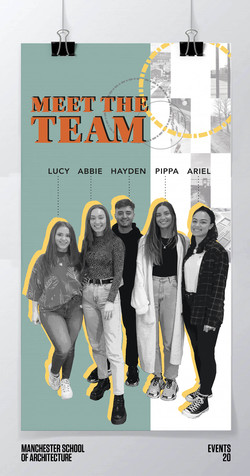 Introducing the NEWTOPIA team, currently we are a team of five MArch.1 students at the Manchester School of Architecture 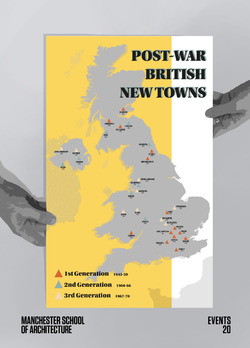 Post-war British New Towns was an attempt by the UK government to alleviate housing shortages and slum clearance after the country-wide destruction of the Blitz during the Second World War. The New Towns Act of 1946 granted the permission of compulsory purchase orders to buy land at its agricultural value, by the authority of specially appointed Development Corporations, to transform into new communities with populations between 30,000 to 80,000. Taking over a decade to build, the first generation of New towns were slammed by many critics about their low-density approach to housing design. The later New Towns tried to learn from their mistakes and responded to adaptations in society as well as the rising numbers of cars.

Earlier this year, a group of 17 MArch year 5 students took a research method module which looked at 4 different case studies either in the second or third generation, these included Skelmersdale, Redditch, Telford and Warrington. This research involved the primary data collection from archives, private collections, online sources and libraries to create a case study document. The teams then produced a poster and model to present the overall findings of the town. Oral history interviews were also undergone to analyse the towns from different perspectives, either from a residential or design point of view. These case studies will be displayed at the exhibition along with other material made during the events week. We look forward to seeing the spacial design layouts to present this amazing work.

In February, we visited The Modernist gallery to gain an understanding of the space which will host our exhibition in May. We took plenty of photos to understand its spacial qualities and used the exhibition already on display as a reference for potential arrangement opportunities. We met with Jack Hale and other members of the gallery to discuss key dates within the two week period of events. These key dates included the set up, duration and dismantling of the display, as well as the official opening evening which will be announced in a later blog post. Keep you posted! 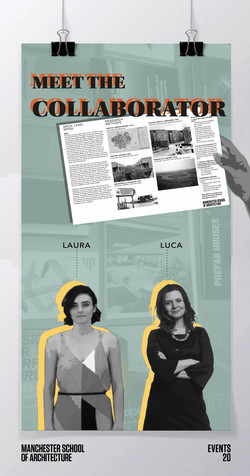 At the start of this university year Laura and Luca ran the MArch year 5 module researching into Port-war New Towns. They are both experienced and very interested in the topic and helped the students understand their case study through primary research and exploration. They are now coordinating with our team to help us organise this exhibition in May. They both have experience in research and exhibition composition, organising displays of other modules they have ran throughout the years.

Laura is experienced in practice, teaching and research. She is primarily concerned with the implications of policy and regulation for architectural and urban form. From this interest, Laura's areas of research, which span both historical and contemporary domains, has been published in books, journals, reports and conference papers. Some of these include 'Speculating Urban Futures through Architectural Design Methodology’ and 'Policy Strategies + Design Processes: Competing Logics?'

Luca’s research and publication portfolio is impressive. Her cross-disciplinary interest in the theory and history of urban open space design derives from her education in a variety of subjects. Her publication lists include titles such as “The Birth of the Theory of Urban Green Systems in Britain and Hungary. Correspondence between Thomas H. Mawson and Béla Rerrich concerning Urban Design Principles” and “Urban landscape approaches for a de-industrialised town: City beautiful and modernist restructure in the case study of Bolton, Manchester” 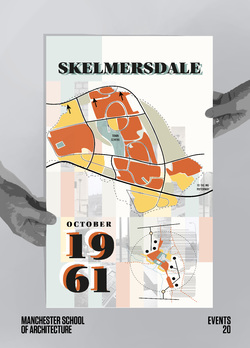 The first of the four case studies to be designated was Skelmersdale in October 1961 to help alleviate the population struggles in North Merseyside. It is situated just eleven miles north-east of Liverpool, a masterplan for 4030 acres and a population of 80,000 residents was designed by architect Hugh Wilson which was dominated by residential land use which rejected the neighbourhood style blocks used in the earlier New Towns. The location of Skelmersdale was specifically chosen due to it possession of nearby train-stations, connections to the M6 and close proximity to Liverpool and further afield for economic expansion. The town included a swimming pool, cinema, sports hall, colleges and many more community based facilities. Additionally, the idea of the ‘high street’ during the 70s was dying and so the large Concourse shopping centre was built in 1971 surrounded by large spans of greenery. However, 20 years after its designation, the town was never completed to its original design and the population only peaked at 40,000. Still to this day the New Town is in dire need of some funding to revitalise its community.

This case study was undertaken by Joe Copley, Hayden Webster, Liam Costain and Lucy Woodward. Their document was titled : “A case study to assess the growth predictions of Skelmersdale and whether these affected its long term sustainability” 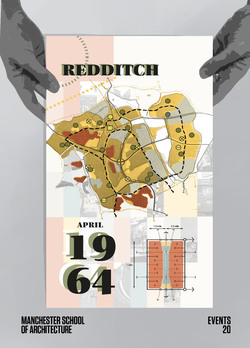 The second of the four case studies to be designated was Redditch in April 1964 to help alleviate the overcrowding in the West Midlands. It was already a small market town situated just fourteen miles south of Birmingham. Its masterplan was the first with emphasis on public transport rather than the use of the private car for a population of 70,000 residents across 2,914 hectares of designated land. Designed by both Hugh Wilson and Lewis Womsersley, with Michael Brown as its landscape architect. The design aimed to enable residents to work in the town; provide social and commercial facilities; integrate existing and proposed development; provide open space for recreation and amenity; and develop to a high standard of layout and design. Redditch was built on poor quality agricultural land and within the catchment area of the River Arrow dating back to 1384. Today, the New Town accounts for 50% of the borough area and 93% of its population.

This case study was undertaken by Koh Sung Jie, Silvio Lussana, Sophie Chappel and Szymon Milczarek. Their document was titled : “A short case study to assess the conventional and unconventional aspects of development in Redditch” 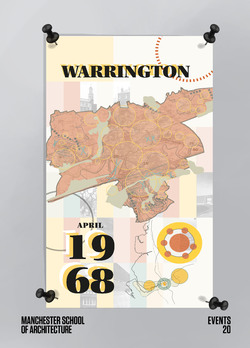 The third of the four case studies to be designated was Warrington in April 1968 to help relieve the overcrowding in Manchester and to revitalise industrial areas, yet it soon became a natural growth point for the North West of England. It evolved from a medium sized industrial town, just 16 miles south west of Manchester, but soon became a major hub for national and international companies working across the region. The intended population was 210,000 from its already large population of 124,000 at its time of designation, this was to be deployed across 7,535 hectares of land. The motive of the Warrington New Town Development Corporation was to ensure that public consultation was at the forefront of design and sought to cater for the booming car owning population of the time. As well as the development, it was essential that Warrington should retain its historic character, something that it relied on economically. The outline plan set out by the corporation aimed to connect the towns residence and businesses together to help add to the quality of the design.

This case study was undertaken by Aifa Binti Muthuraman, Jack Carter, Alexander Hughes and Cezara Misca. Their document was titled : “A short case study to assess the housing and landscape predictions of Oakwood, Warrington” 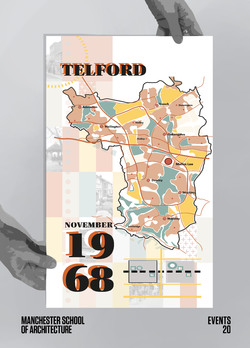 The last of the four case studies to be designated was Telford in November 1968, which was originally designated as Dawley in 1963. As well as accommodating overspill from other congested cities, it was intended to regenerate the waning East Shropshire coalfield area. Just 22 miles north west of Birmingham, conservation and tourism played an important role in its development as the area had lots of rich historical advantages to offer. The most famous of which being Ironbridge Gorge World Heritage Site. The intended population was 168,000 from 70,000 at its time of designation, this was to be deployed across 3,683 hectares of land. The masterplan aimed for a balance between industrial and residential development, which utilised a large amount of despoiled and contaminated land, formerly used by extractive industries. The Development Corporation wanted to integrate the market town of Wellington and a number of former townships with new, low-density, single-use development areas, linked by an extensive road network enabling congestion-free car travel. Now, Telford is one of the 64 largest urban centres in the UK which has expanded over the years through several urban extensions.

This case study was undertaken by Mona Tamaru, Motunrayo Soyannwo, Sally Lofthouse, Yeside Sobowale and Xinbo Wang . Their document was titled : “A case study to assess the development and success of Telford” 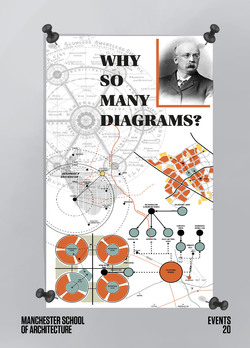 WHY SO MANY DIAGRAMS?

In 1898, an idealist called Ebenezer Howard published ‘To-morrow: a Peaceful Path to Real Reform’ which explained a socio-economic theory which harmonised the advantages from living in both the town and country, born from a time where rapid industrialisation was causing the overcrowding and pollutant of cities. This book was the birth of the Garden City. To accompany it, he drew a series of diagrams to visually explain this revolutionary concept, the most famous of these being no.1 ’The Three Magnets’.

From here, the diagrams became so significant in the field as it was a means of communication, the diagram in practice then was used to illustrate essential public information with clear legibility and was fundamental in the planning of the post-war New Towns. They were used from concept all the way through to detailed design, illustrating ideas, techniques and options through colourful graphic illustrations.

It is through the diagram that the case studies within this project were explored, taking inspiration from those towns. The diagrams used in this work will be the main focal point of the gallery along with the posters and models created. They are colourful and visually appealing, allowing the audience to understand the findings from these investigations. 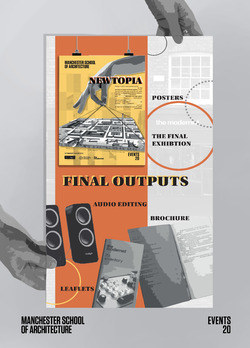 The overall objective of this event is to curate an exhibition of the work produced by the 5th year research method module on four post-war New Town case studies. However, within this event other outputs are needed to either be displayed within or to market the exhibition. To undertake these tasks, various workshops and guest speakers have volunteered their time to help develop certain creative skills.

POSTERS - Graphically pleasing posters to present the findings of the research, these do not have to follow a certain format yet all have to look consistently pleasing together.

AUDIO EDITING - Included in the exhibition will be clippings from interviews of residents or designers from the new towns conducted earlier in the year. This will develop students understanding of sound installations in a space.

LEAFLETS - These will advertise the opening evening and duration of the exhibition. These will be handed out to the public during the event and published online.

BROCHURE - This final publication will be a take away and document for reflection even after the exhibition has been dismantled. It will summarise all the case studies and work undergone during the event.