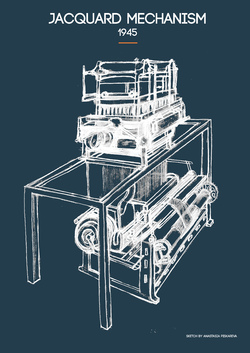 Sketches are made as part of the documentation and idea development in early processes. One of the findings in our visit to the Science and Industry Museum is the invention of the Jacquard mechanism.

Created in 1945, the machine used punched cards to set a weaving pattern. This is an important innovation as it transitioned the manual labour of weaving to a machinery-controlled one, increasing efficiency and productivity in the cotton industry in Manchester. 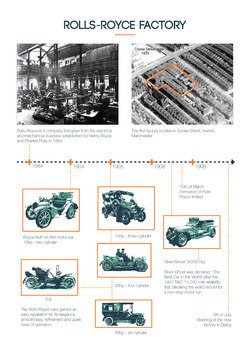 Today we also look at the first Rolls-Royce factory established in Hulme as part of our case study on past Manchester. Hulme has changed beyond recognition since the motor manufacturer was there, however, there is still evidence of the association of Rolls-Royce. Roads are named after the pair: Rolls Cresent and Royce Road. 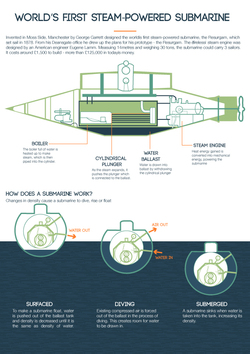 Today we also look at Manchester's inventions in the past, one of it being the world's first steam powered submarine. In 1879, the submarine - named Resurgam, was designed by George Garret in Moss Side, with an aim to safeguard the country by building the ultimate deterrent of that time. Measuring 14 metres, the vessel could carry three sailors and cost around £1,500 to build - more than £125,000 in today’s money. 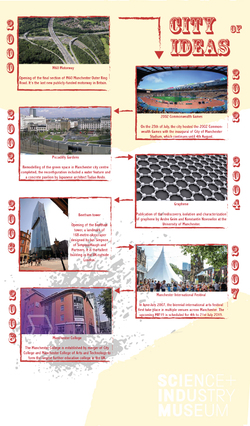 In 2002, Manchester was chosen as the host city for the Commonwealth Games. It was the largest multisport event ever to be held in the UK and gave an opportunity for the city to display the changes following the 1996 bombing. It catalyzed the regeneration and heavy development of Manchester and boosted its reputation as a European and global city internationally.

Several developments were completed in Manchester at the turn of the century, such as the M60 Motorway, the City of Manchester stadium (for the Games) and Beetham tower. 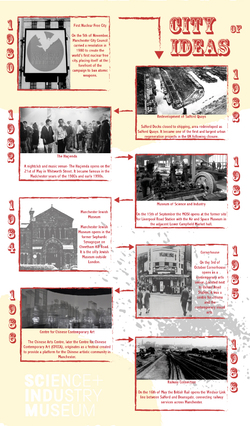 During the 1980s, with the demise of many traditional industries under the radical economic restructuring often known as Thatcherism, the city and region experienced some decline. The revival started towards the end of the decade, catalyzed by the creative music industry. New institutions such as Factory Records and Fac 51 Hacienda earned the city the sobriquet Madchester.

This era saw a thriving arts, music and culture scene in Manchester, evident in the opening of multiple cultural institutions, museums, galleries and music venues. 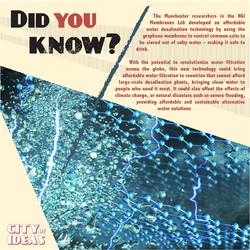 Together with our collaborators at The Science and Industry Museum, we are celebrating Manchester’s innovative feats both from the past and present, looking towards the future of the city. This is the first in a series to get our undergraduate members excited for the coming weeks.

Do you know that the Manchester researchers in the National Graphene Institute (NGI) developed an affordable water desalination technology by using the graphene membrane to control common salts to be sieved out of salty water – making it safe to drink.

With the potential to revolutionise water filtration across the globe, this new technology could bring affordable water filtration to countries that cannot afford large-scale desalination plants, bringing clean water to people who need it most. It could also offset the effects of climate change, or natural disasters such as severe flooding, providing affordable and sustainable alternative water solutions 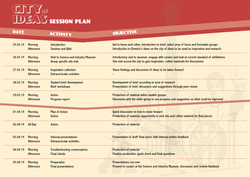 The City of Ideas is an exhibition in planning at the Science and industry Museum, over the two week events program, we will be coming up with exhibition ideas which express the Historical, Cultural and Technological importance of Manchester as a pioneering city upon the world stage. We will have the chance to delve into research of the city, and produce a beautifully crafted book that displays our many artworks, drawings and concept models.

We hope the City of Ideas will help students to develop their presentation and communication skills, with the chance to make a difference to a real world exhibition outside of the university. Some technological skills that we as a team possess are the use of Rhino, SketchUp, Photoshop, Illustrator, Indesign