Sadly, it’s the end of Events. All the groups brought together their proposals in an exhibition in the popular Benzie atrium. This is a space constantly filled will life of students, creatives and the general public; therefore, it was the perfect space to show case the future ambitions for Brierfield Gas Tower.

The gas tower model was positioned central to the atrium with each of the proposals following to show the progression of scheme sizes. Each proposal stood proud on an individual plinth so that each one could be viewed from a range of angles. Presentation boards were placed behind each model so that visitors could understand the scheme.

The exhibition had a positive outcome! Visitors to the Benzie stopped by the exhibition with curiosity to ask questions about the project, this was great publicity for Brierfield and the great work In-Situ do! We heard some great feedback which we repeated back to Paul from In-Situ. Next the exhibition will move on to Brierfield to see what the opinions of the local residents are. 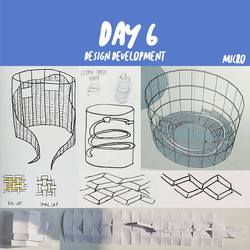 Today, the micro group developed their proposals to strengthen their tribute to the rich history of Brierfield. A key element within this history, as already illustrated through previous local art projects, is the textile mills. The group decided that this should be emphasized in their proposal. After a lot of thought, discussion and sketching, they decided to create a fabric lattice façade that can utilises the gas tower structure. A key ambition within this design is also a ramp which will allow visitors to see the picturesque surrounding landscape. They also discussed that any materials used should be respectful of the local area by matching them, using similar stone to the nearby houses.

As like the other group, the next stage they took was planning the construction of their model ready for the workshop sessions tomorrow. This group decided to create a light frame that mimics the gas tower structure, allowing the façade they create to wrap around the gas tower model temporarily so that the other proposals can be demonstrated on it too. 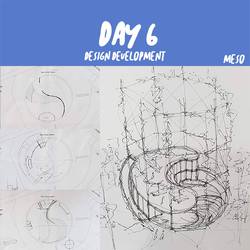 Today, the meso scale group reflected back on their design thoughts from last week and refined the details to further plan how these designs can be presented to the public. They explored how the performance stage will work with natural lighting so that the public of Brierfield can have a well lit space that can be utilised all year round. Following the public consultation, it was made clear that Brierfield is lacking hospitality places for the community to socially come together. The group therefore explored the idea of a café and bar and began sketching in plan how a space like this could be incorporated into an exciting place for the arts.

In preparation for the exhibition on Friday, the group began planning their models. They decided that the structure should be self-supporting so that is can be presented inside and outside of the model. 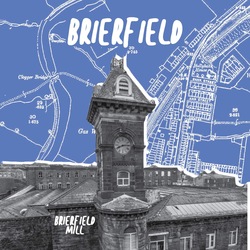 Brierfield is a small town within the Borough of Pendle, Lancashire, with a population of around 8,100. It is historically rich, with strong religious and industrial significance.

In 1652, George Fox, the founder of the movement of the Quaker, had his first vision upon Pendle Hill, which lead him to travel Europe inspiring people with what he saw. A footbridge near the site is named Quaker Bridge after this historical tale.

During the early 19th Century, the town went under a lot of development due the building of the Leeds and Liverpool Canal, the Blackburn to Addingham Turnpike Road and a railway from Preston Colne. This lead to an industrialisation of the area, with the rise of several cotton mills. The cotton industry became the main employer for the residents of Brierfield, until the owners Smith & Nephew ceased production. After years of disuse, Pendle Council purchased the mills with the intention of using them as a flagship regeneration project. 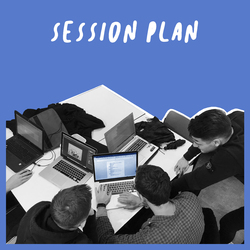 We met to discuss the session plan for the event; many exciting activities are in the mix! We are planning a trip to Brierfield to explore the site of the gas tower and meet the In-situ team at their new space ‘The Garage’, accompanied by the site developers Pearl. The local community will be engaged in a fun way using In-Situ’s Talkaoke, encouraging insightful community discussions in a relaxed and friendly way! We discussed the useful architectural skills we can teach and how we can successfully deliver them, including site analysis, model making and video animation. A busy week will be concluded with an inspiring exhibition within the Benzie atrium, showcasing the impressive skills and successful schemes created by the students of Group X, MSA.