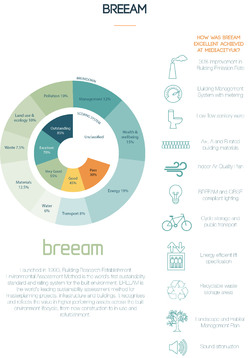 Today we began to further our Research on Media Cities sustainability standards, and develop an understanding of the BREEAM status and the moves the development took to reach their objectives.

This research is part of an in-depth case study on the development, and future technologies that encourage sustainability in present day Manchester. 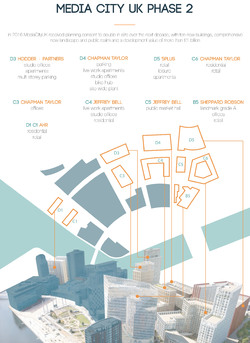 Today we began to expand the understanding of Media City UK by looking at the upcoming development. The development emphasizes a shift in Manchester's industry towards creative and entertainment businesses. 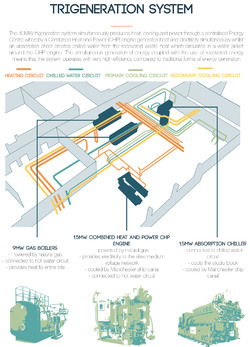 Today we began to document our research for our booklet.

Here we are looking into the case study of Media City and exploring the systems which are used to achieve its BREAM sustainability status. The use of recovered waste heat means that the building system is efficient in comparison with traditional forms of energy generation. 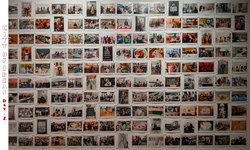 Day 2
Our final visit of the day was to Manchester Art Gallery, the key aim of this visit was to understand the curation of artwork. However, we also discovered some interesting pieces which highlight the current cultural position of Manchester. A collection of photographs by artist Parr ‘reveals a diverse, inclusive and multi-cultural city’, something which we wish to explore further throughout the following weeks. 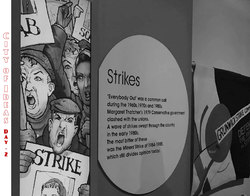 We also took a visit to the people’s history museum to see how Manchester was culturally affected during the post war period. The economy, living conditions and local industry suffered leading to the Thatcher era union strikes. However, Manchester was able to bounce back, establishing a rich creative industry, with Granada Studios, and music from the likes of The Stone Roses and Joy Division. 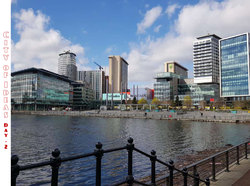 For our second visit of the day we traveled to Media City, to look at its recent development and its connection to sustainability. Whilst there we toured the Lowery and the Imperial war museum to better understand how spaces are curated. 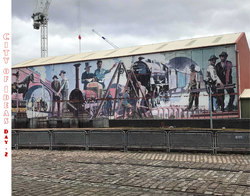 In day two of our events we took a visit to the Science and Industry museum. The aim of this visit was to contextualize our research and begin to understand the type of material that can be curated for exhibitions. It also helped us to rule out the content which has already been displayed at the museum. We were also able to take inspiration from their graphical styles. 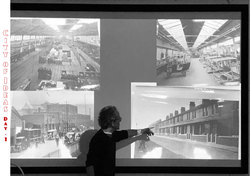 During the afternoon session Dominic discussed the connections between Detroit and Manchester, and how the music industry has become integral to their development and heritage. From this we will be able research how Manchester managed to develop when it could no-longer rely on the cotton industry and had to turn to music, entertainment and technology for its development. 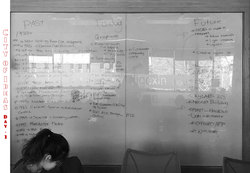 In the first session of the week we began to look at the key moments throughout Manchester’s history in the post war period. From here we were able to pick out the key aspects of our timeline along with ideas for case studies which we will be focusing on later in the week. We did this by dividing into 3 groups with focus on the Past, Present and Future.

We found out that Manchester was the center of several pivotal discoveries, including IVF, the contraceptive pill, the ‘Manchester Baby’ computer, and more recently the Raspberry PI computer, along with the discovery of graphene at the University of Manchester.

We also began to develop Case Study Ideas, some of which include an in-depth study of Hulme’s redevelopment, an exploration of Media City and its BREEAM status, and how AI is looking to shape the future of the city and its transport. 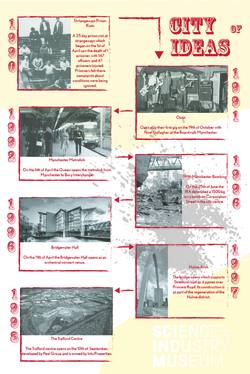 Manchester’s city center saw significant development during the 1990’s, due to the IRA bomb in 1996, along with the new infrastructure of the Metrolink, whist Spinningfields and the Trafford center were developed.

Manchester was rising to its position as the Second City, as investment began to increase. 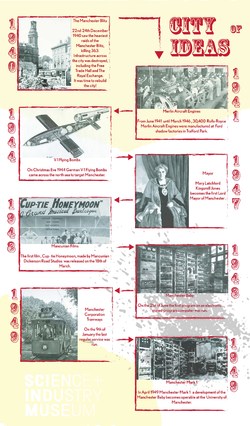 In the First installment of ‘A Post-War History’ we began to look at the rich historical past of Manchester throughout and post WWII.

This will be the basses for our Events research, where we will create a timeline of Industry, Invention and Technology, before delving into three in-depth case studies of past, present and future Technologies and Inventions.

Over the following weeks we hope to develop and expand on this before presenting to our collaborators on the 5th of April. 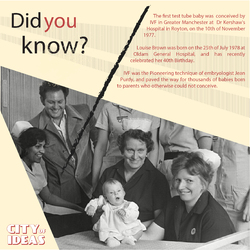 In the second installment of our 'Did you know?' series we take a look at Manchester at the for front of medical research.

In 1977 embryologist Jean Purdy developed the pioneering technique of in vitro fertilisation (IVF) and on the 10th of November 1977 the first 'test-tube baby' Louis was conceived.

This technique has paved the way for thousands of babies, to parents who otherwise couldn't conceive.