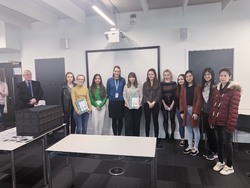 LAST DAY
It was a great wrap for the event weeks. We started with handing out the publication we had for our respective guests and a digital presentation
The whole concept for city of ideas was wrapped around the timeline of Manchester and sub-divided into three major parts : Past, Present and Future.
We then moved on to some of the innovations done in Manchester in the past and how we had carried that forward into our case studies.
The three sub groups had done case studies to understand the technology, transport and culture for each phase.
Overall, It was a great experience with good amount of participation and mutual learning within the group.
And it was even more pleasing to get a good feedback from Katie and others on the Presentation of the graphical information and our methodology. 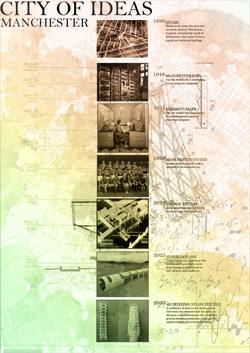 On the third day we brainstormed with all the BA and MA students and laid out a story board for the publication. This led to splitting of the group into four different teams for each phase of the timeline.

All the sub-teams have been researching about the information for the case studies and exploring different options of putting them together on the story board. 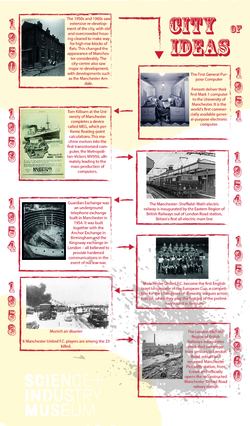 Continuing from the previous historical time line, We look at the period from 1950’s to 1960’s.
This was the decade of new beginnings and major Re-development.
Manchester's key role in the industrial revolution evolved as the city became a center of research and development.
The same period saw the rise of Granada TV studios with the soap opera Coronation Street, which was first aired on ITV in December 1960 and remains on air more than 50 years later.

The city also attracted international media for the success of its two major football clubs - Manchester United and Manchester City.